skip to main | skip to sidebar

A (Task) Force in Congress 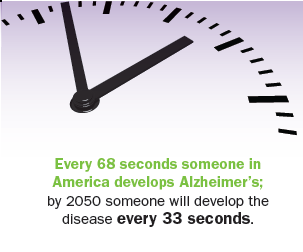 Every 68 seconds someone in America develops Alzheimer’s. So, every minute that passes without action from our elected leaders increases the devastating impact this disease has on families, caregivers and our nation. The arrival of the 113th U.S. Congress earlier this month brought a number of new faces to our nation’s capital, along with many familiar ones. And for many Americans, it brought a hope that members of Congress would avoid the partisan gridlock seen in previous years. Thankfully, the issue of fighting Alzheimer’s disease spans partisan lines.

The Congressional Task Force on Alzheimer’s Disease is a clear example of bipartisanship and has been instrumental in raising awareness and securing funding for research. Led in the House by Co-Chairs Rep. Edward J. Markey (D-MA), Rep. Christopher H. Smith (R-NJ), Senator Susan M. Collins (R-ME) and Senator Mark R. Warner (D-VA) in the Senate, the Task Force is working to bring the mounting Alzheimer's crisis to the forefront of the congressional agenda.
Please urge your Senator(s) to join the Task Force today.

25 years of making our VOICE heard
Since 1989, Alzheimer's advocates have gathered in Washington, D.C., for the Alzheimer's Association Advocacy Forum to urge elected officials to make Alzheimer's disease a national priority. These advocacy efforts have produced important results through the years, but there is much more to be done.


Meet your Member of Congress!
Do you want to take the next step in moving our mission forward? Are you willing to speak out on Alzheimer’s issues? Take part in our District-Forum-District program.

Please join your fellow advocates and Alzheimer’s association staff as we begin our annual series of meetings with members of Congress. Initial meetings are being held in your local congressional district from January to March, with follow-up meetings in Washington D.C. to take place during the Advocacy Forum. A third meeting will be held during May and June back in congressional district offices.

These meetings are absolutely critical to ensuring our legislative priorities are acted upon quickly by this Congress. Contact your local chapter and get involved today.
Posted by Marie Fostino at 7:52 PM 2 comments:

Wow it has been ages since I have been on this blog. So you can imagine how  supprised I was to see people are still reading it.   My father in law died almost 9 yrs now since this terrible disease hit him.  I miss him very much. I think fondly of him often and talk out loud to him with the hope he hears me.

At work the other day, I was lucky enough to have a couple of patients with dementia/ alzheimer's.  I love those patients, especially since I usually notice not to many family memebers really understand what is going on with them. I love to try and explain what their loved one is going through and offer to give them one of my books.

So what are you going to boost your mind delaying the onset of dementia?

Keep your mind active and sharp through various activities. Keep the mind healthy. Mental stimulation helps ward off memeory loss.  Watch a movie -- Watch a ball game -- Work on a cross word puzzle -- Join a chess club or gardening group -- Volunteer in your community -- Work a part time job -- Have a hobby- Ear a healthy diet -- Includ physical activity during your day, at least 30 minutes to increase your blood flow to your brain.

I wrote my Alzheimer's book about the daily trials and tribulations of taking care of my father in law in the hope to help other families who are dealing with the same thing.  It is important for caretakers to know that they're not alone, that others have experienced the same frustrations. Sometimes a caretaker feels very isolated -- the world, after all, doesn't stop, despite the sense that your world is frozen in time.

Thank you and God Bless You all.
Marie Fostino
http://mariefostino.weebly.com/alzheimers-book.html

Sleep is an important part of our life. We can not function very well when we are to tired. We can not think straight, and sometimes we can't even see straight.

Alzheimer's patients have trouble with their sleeping habits. They have their time clock mixed up and not sure when it is night or day. Sometimes they may be up roaming around all night, or sleep all day.

Most people require about seven or eight hours of sleep. My grandmother who will be 101 in April only needs six hours of sleep.  A schedule is good to have, when to sleep, when to wake up, but when your loved one had Alzheimer's it is hard to keep them on  a  schedule.

I remember with my father in law, I would try and not let him take any naps, give him dinner at the same time, let him walk around the driveway like he wanted to and than have him sit and play cards at the kitchen table while the rest of us watched TV. I hoped to have him on a schedule as to when to be awake and when to be asleep. But it didn't work for him. He would lie awake in bed, waiting for me to leave so he could sneak out again.

As the caregiver it is also important to have enough sleep so you can deal with the aggravation of your loved one. You know they don't mean what they do or say, but without enough sleep, you can get testy yourself, and maybe accidentally taking it out on them.

I find for myself I cannot eat at night before I am going to sleep. I find I will be wide awake with trouble finding any shut eye and crabby the next day.

Check out this article on Alzheimer's Weekly:  http://alzheimersweekly.com/content/easing-sleep-disturbances-patients-caregivers

So lets talk about our New Year Resolutions.  It is usually to stop bad habits or to take on improvements. So I tend to think that most people somewhere on their list put down something about losing weight. Whether it is to diet or exercise. Did you know that if you are between the ages of 30 - 50 and you are exercising you are also helping to reduce the risk of Dementia.  When you exercising the blood & oxygen flow through your body also goes through your head, reaching your brain improving cognitive test scores on healthy adults. The brain depends on healthy blood supply which reduces potential for stroke which can lead to dementia

So what is your New Year Resolution?   Don't forget about reading books, doing cross word puzzles or  watching game shoes which play with the mind. Try to eat the right foods, water and get enough rest.
I hope you have a great New Year.

We are all in denial about Dementia / Alzheimer's.  I forget where I put things so I make sure that I keep things a certain way. The keys go on the hook by the kitchen phone when I walk into the house. I put my shoes in the closet and never leave them downstairs. I do little things into a habit so that I will know where everything is when I  need them. But what happens when you don't put the keys on the hook by the phone. Can you remember where you put them? Does your memory work? What are some of the signs for seeing a doctor?

You need to look for the signs. Like can  you retrace your steps to find the lost keys?  Can you still make a pot a coffee, something you have done everyday since your 20's?

It is funny that sometimes I forget the name of a movie or a long lost friend. It will bother me all day long and than finally when I let it go, the name comes into my head. It is so funny how the brain can work so slow sometimes, but it is working and that is what counts.

Remember that it is important to exercise and eat right. Plus play games that work with your mind or do cross ward puzzles. Keep your mind sharp along with your body and you will keep yourself with your family a little longer. Alzheimer's / Dementia takes your away from your family even though they can see your body.

HAPPY NEW YEAR!   We get the chance to start new again. We get to change bad habits, and eat correctly, and exercise.  You with me?  We get to fix relationships and start over like new.

What can we do to fight dementia? There is ever-growing evidence that exercise is both highly therapeutic and powerfully protective. Watch this video for insights to help get your new year in motion.

I try to walk 3 miles a day. One reason is to stay in shape. Second reason is because I enjoy listening to my radio while I am walking and having this time to myself. But the big reason is to help prevent Alzheimer's.

Read this from Alzheimer's Weekly called Walk the Walk.
http://alzheimersweekly.com/content/walk-walk

Marie Fostino
I am getting old. HEHE but than I do believe that you are only as old as you feel. hehe